Now easier to rename a user

Three new updates to Google Sync for iPhone and iPad

We don’t have to tell you that the workforce is increasingly mobile, and that workers on the go expect to be fully productive on email and calendar from their mobile devices. But we do want to tell you that we have a few new features for Google Sync users that will help employees work efficiently from anywhere on their iPhones and iPads.
Google Sync keeps your phone’s native mail and calendar apps in sync with your Gmail, Calendar and Contacts. Today, three new updates to Google Sync for iOS will allow you to:

Admins can now transfer Google Documents from one user to another
Administrators can now transfer all documents owned by one user to another via the Administrator Control Panel. Reassigning ownership can be useful when a user is leaving your organization. This was previously only possible via the Google Documents List API.
How to access what's new:
To transfer documents, click the ‘Advanced tools’ tab in the Administrator Control Panel, scroll down to the ‘Document ownership transfer' section and put the user name of the current owner in the ‘From’ field and the user name of the new owner in the ‘To’ field. Click ‘Transfer documents’ to complete the transfer.

Note: Transfers can be very large. You may want to check with the new document owner to make sure they have enough space in their Docs account. You can check storage used by clicking the ‘Upload’ button from the user’s Docs List.
Posted by RTWMobile

When working with Law firms we recommend considering Clio's cloud based practice management solutions along with Google Apps. They recently published a new whitepaper, “Comparing the Costs: Analyzing the total cost of ownership of Clio vs. traditional desktop practice management solutions,” that provides an in-depth analysis of the true cost of ownership of Clio, a cloud computing application, v. traditional desktop applications, namely Time Matters, PC Law and Amicus Attorney.
The whitepaper was developed to help answer a frequently asked question from prospective customers:  “Although cloud-based solutions like Clio are more affordable than traditional desktop solutions on a month-to-month-basis, don't cloud-based solutions end up being more expensive over the long term?”
Read more »
Posted by RTWMobile

A few improvements to discussions in Google Docs

In March, Google launched discussions in Google Docs, replacing comments with discussion threads, @mentions, email notifications, and much more. This week, they launched a handful of improvements.

Improvements to the discussion pane
The discussion pane now shows the selected text for each comment thread, making it easy to figure out which part of the document each discussion pertained to. We’ve also given the pane a visual tuneup. 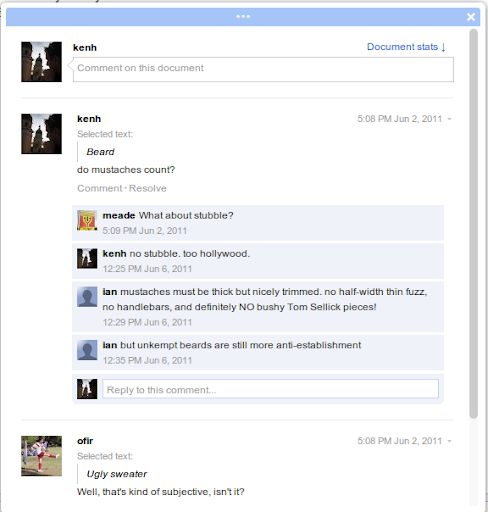 Ever wondered if that document you shared is getting looked at. Google is now providing statistics.

Email ThisBlogThis!Share to TwitterShare to FacebookShare to Pinterest
Labels: Docs 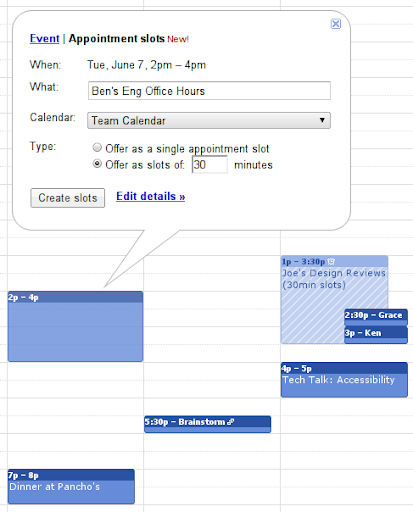 Every Google Calendar has its own personal appointments sign up page; you can embed it on your website or give the URL directly to friends and clients. You can find the URL for your appointment page at the top of the set-up page, which you can access via the Edit details link.